The first step of cooling curve analysis is to visually compare and analyze the time-temperature cooling curves obtained under the same test conditions. The purpose of this visual analysis is mainly to obtain the time required for the cooling transition with different characteristics and the temperature at which it occurs. For different quenching cooling media and quenching conditions, the cooling curves of interest can be superimposed for comparison and evaluation. There are many methods to compare and analyze cooling curve data, and there are two most commonly used methods at present. The first method is cooling curve parameterization. The parameters suggested by Tensi include:

2) The temperature TA-B (°C) at which membrane boiling changes to nucleate boiling.

6) The temperature T CRmax (°C) at the maximum cooling rate.

Parameters 1~3 are related to the time and temperature of the transition from full-film boiling (steam film boiling) to nucleate boiling and the cooling rate at the critical temperature.

The reason for measuring the cooling rate at 700°C (parameter 4) is that people usually want to increase this cooling rate as much as possible to avoid the pearlite transformation zone of steel. Parameters 5 and 6 are the maximum cooling rate and the temperature at which it occurs, respectively. Generally speaking, people hope that CRmax is as large as possible, and T CRmax is as low as possible. The cooling rate at certain temperatures and the cooling rate for the time required to cool to these temperatures, such as 300°C and 200°C (parameters 7 to 10), are also often measured because they are related to the cracking and deformation tendency of steel. In order to reduce deformation and cracking, people hope that the cooling rate in this area is as small as possible. Parameters 7~10 are related to the martensite transformation zone, and it is generally hoped that the smaller the better. These are illustrated in Figure 2-30 and are often used on steel, stainless steel, and Inconel600 probes. Standard ATMD200, D6482, and D6549 quote these parameters. 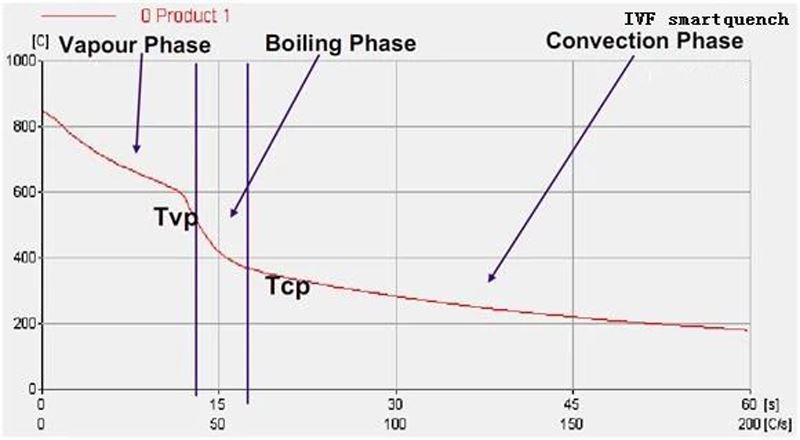 For the cooling curve obtained using the silver probe, there are also various cooling parameters, but they usually include two or more of the following parameters:

2) The temperature at which nucleate boiling changes to convective cooling.

5) The critical heat flux density can be estimated from the cooling curve.

It is important to know the inherent variability of the cooling curve analysis data. When specific statistical data is not available, relevant reports claim that the useful data accuracy limit is ±(8%~10%). Generally, complete statistical analysis results cannot be obtained. However, for ASTM D6200, the Inconel600 probe shown in Figure 2-24 is used to test the test program of a non-stirred mineral oil quenching cooling medium, and the accuracy results can be obtained. There are many reasons for this variability, including thermocouple size, contact conditions and reaction time, the position of the thermocouple hole in the probe body, trigger mechanism and time-temperature data collection start temperature, data collection rate, probe surface condition, The cleaning method, the arrangement of the probe in the quenching cooling medium, the volume of the quenching cooling medium and other factors. Considering the number of laboratories reporting cooling curve data, the difference between probes and test equipment suppliers, etc., surprisingly, this variability is not very large.