Since the latter two types are extremely inconvenient to calculate and draw in use, in most cases, they are simplified to linear and parabolic types, which can be expressed by the empirical equation as follows:

A1, A2, K1, and K2 in the formula are specific coefficients.

According to the actual process test and the data of relevant references, the tempering equations of some commonly used types of steel were calculated and modified by mathematical statistics method. The practice has proved that these empirical formulas have important application value. 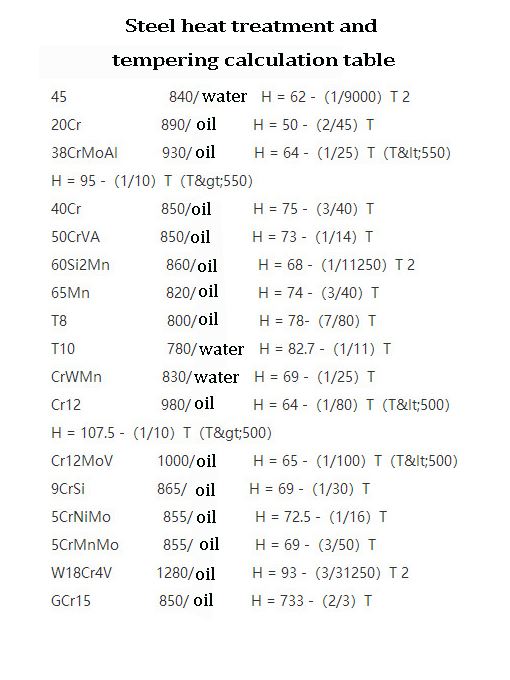 1) The chemical composition and mechanical properties of raw materials shall meet the national technical standards (GB, YB, etc.), and the maximum external warp (or relative thickness) shall be close to or less than the critical diameter of quenching.

3) In the process of heat treatment, the correct quenching medium should also be selected to make the cooling capacity meet the technological requirements; Prepare heat treatment of steel as required;

4) Considering the effect of random factors, the actual tempering hardness and temperature of steel after heat treatment are allowed to have an error of 5% from the calculated number.

Tempering treatment refers to the treatment of hardened or normalized steel immersed at a temperature lower than the critical temperature for a period of time and then cooled down at a certain rate to increase the toughness of the material. From the theory of metallurgy, we know that after quenching and normalizing treatment, a part of the carbide can be precipitated out and the residual stress caused by rapid cooling can be eliminated for a period of time, thus improving the toughness and flexibility of the material. Obviously, the effect of tempering treatment depends on tempering temperature, cooling rate, and other factors.