What does the tempering brittleness of steel mean? What’s the solution?

3.The larger the austenite grain is, the more residual austenite is, and the more serious the tempering brittleness of the first type is

1.Do not temper in this temperature range

2.Isothermal quenching is used instead

1.Impurity elements P, Sn, Sb, As, B, S cause brittleness

In nickel-chrome steel, antimony has the greatest influence, tin is the second

In chrome-manganese steel, phosphorus plays the most important role, followed by antimony and tin

Phosphorus is more effective than tin for mild steel

2.Promote the second type of tempering brittleness elements are Ni, Cr, Mn, Si, C, these elements and impurity elements at the same time cause brittleness

When there is one element in steel, the brittleness of manganese is the highest, followed by chromium and nickel

5. The austenite grain is large

2. Nb, vanadium, and titanium are added to refine austenite grains

3. Adding the second type of tempering brittleness of the elements molybdenum and tungsten

4. Avoid tempering at 450~650oC, which should be quickly cooled after tempering

5. Use of Sub-temperature Quenching and Casting Waste Heat Quenching to Reduce and Curl the Second Type of Tempering Brittleness (END) 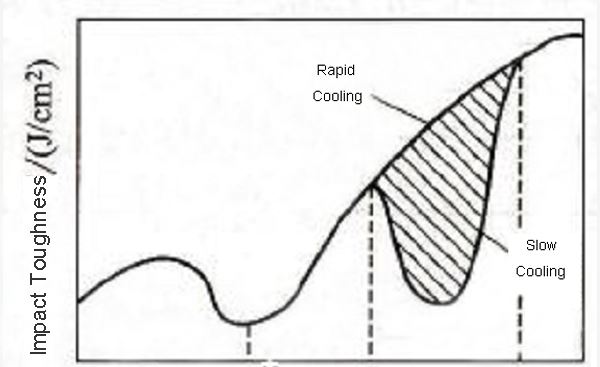 (1) The Charpy impact energy of the first kind of tempered brittle steel parts after quenching has a trough in the first kind of tempered brittle region with the change curve of tempering temperature. The mechanical property index of steel has a different sensitivity to the first kind of tempered brittleness, and it is related to the loading mode.It should be noted that such as the presence of stress concentration, impact or a torsional load of parts, and require greater plasticity and toughness with strength, the emergence of the first kind of tempering brittleness will increase the risk of brittle cracking of parts, so it is a heat treatment defect. Such remedial measures are re-quenching according to the heat treatment process specification, which is generally believed to be due to the decomposition of carbides from martensite, thus reducing the fracture strength of grain boundaries and avoiding the tempering brittle zone. Appropriately increasing the content of silicon in the material can reduce the brittleness of low temperature tempering, which should be seriously considered in the selection of materials.

(2) The second kind of tempering brittleness is mainly produced in the alloy structure steel containing chromium, nickel, manganese, silicon, and other alloy elements, due to the enrichment of antimony, phosphorus, tin, arsenic, and other impurity elements on the grain boundary, so strengthen the brittleness of the grain boundary caused by tempering brittleness. The characteristics of this type of steel are as follows.

As a result, the impact value of the parts at room temperature decreased significantly.

Such tempering brittleness will result in brittle fracture of steel along grain boundaries.

The second type of tempering brittleness of the suppression and prevention measures are as follows.

In the process of steel smelting, the content of P, Sb, Sn, As, and other harmful impurities in molten steel can be reduced to prevent their segregation at grain boundaries.

The addition of 0.2% ~ 0.5%Mo or 0.4% ~ 1.0%W to the steel, molybdenum is used to slow down the segregation and diffusion of impurity elements such as P towards the grain boundary, or the selection of steel containing molybdenum or tungsten, both of which reduce the enrichment of impurity elements at the grain boundary by preventing their diffusion.

High temperature tempering after the end of rapid cooling, or as far as possible to shorten the parts in the brittle temperature residence time and fast cooling after tempering.

By incomplete quenching or two-phase quenching, fine grains can be obtained to reduce and eliminate the temper brittleness. On the other hand, impurities can be concentrated in the ferrite to avoid segregation toward the grain boundary.

The austenite grain was refined.

The tempering brittleness of steel can be eliminated by high temperature deformation heat treatment.

When the parts are nitriding for a long time, molybdenum steel with low tempering brittleness sensitivity should be selected.The gas nitride of parts is carried out in the range of 500 ~ 550, with a long time (40 ~ 70h) and a thick permeation layer, usually in the range of 0.3 ~ 0.6mm. Nitrogen use with good abrasion resistance, high fatigue strength requirement of precision parts heat treatment process, but it’s important to note that in order to reduce the surface of the parts brittleness, after meeting the requirements of infiltration layer should be back nitrogen treatment (540 ~ 560 x 2 ~ 3 h, ammonia decomposition rate is above 80%), the process is a very important link, otherwise will cause early failure of the parts, directly affect the normal use of spare parts.