Induction quenching has the advantages of small workpiece deformation, high efficiency, energy saving, and environmental protection, easy to realize automation, etc., and has become a common surface heat treatment technology. With the development of industrial technology, higher requirements are put forward for bearing capacity and quality of gears. However, in the existing induction quenching technology, there exists the problem that the tooth root of two end faces of the gear is not hardened, and it is easy to generate bending fatigue cracks during service. Especially for heavy gear, in the case of biased load, the two ends of the unhardened gear teeth are prone to cracking failure. Therefore, realizing the hardening within the full tooth width of the gear can greatly improve the technical level of induction hardening in China, improve the bearing capacity and quality of the gear, and produce significant economic benefits. In this paper, by optimizing the induction quenching process, the problem of overheating the burning and melting of the tooth surface without hardening of the tooth root of the gear end face was solved, and the full tooth width hardening was realized, which was applied to mass production.

The problem points of the induction quenching process include: the eddy-current concentrated heating temperature at the sharp corner is high, while the inner round corner is not easy to be heated, etc. Therefore, in the induction heating process, it is easy for the gear to overheat and melt the sharp corners at the end of the tooth surface, while the root of the inner round corners is not hardened or the hardened layer is not deep enough, as shown in Figure 1. Due to the domestic and foreign standards on the end face of the hardening layer depth requirements are relatively relaxed, usually to reduce the heating power method, to prevent the gears appearing end face-melting these obvious appearance quality defects, but ignore the end face of the root hardening layer depth seriously shallow or unhardened quality hidden trouble. The bearing capacity and quality of the gear are reduced, and the risk of early failure exists. Aiming at this problem, this paper optimizes the induction quenching process by designing a new inductor structure and adjusting the technological parameters. 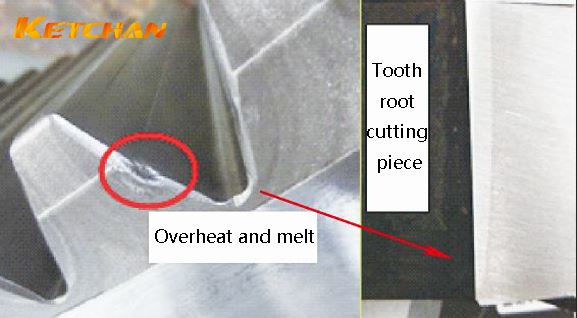 (1) Sensor structure Optimization of the existing scanning profiling structure sensor along with the tooth profile, and simultaneously heating the position of tooth surface and tooth-root during the heating process. Under the influence of induction heating effect, the underheating of the tooth root position of the two end faces of the gear leads to the unhardened or the hardened layer is not deep enough, and the overheated temperature of the tooth surface pitch circle position of the end face occurs. Therefore, in-depth analysis of its technical difficulties, by optimizing the sensor upper and lower guide plate and silicon steel sheet structure, to solve the existing sensor structure of tooth profile heating defects; The upper guide plate and the lower guide plate of the inductor after the structure optimization are of arc inclined upward/lower triangular structure, and the added conductor part enhances the heating effect of the tooth root. At the same time, the special oblique upward/downward triangular structure realizes the non-synchronous heating of the tooth root and tooth surface. In this way, the sensor can only heat the tooth root on the end face to avoid the excessively high temperature of the tooth surface at the end face, as shown in Figure 2. At the same time as lifting the hardening layer of the end surface, the problem of overheating and melting of the end surface pitch circle can be avoided. 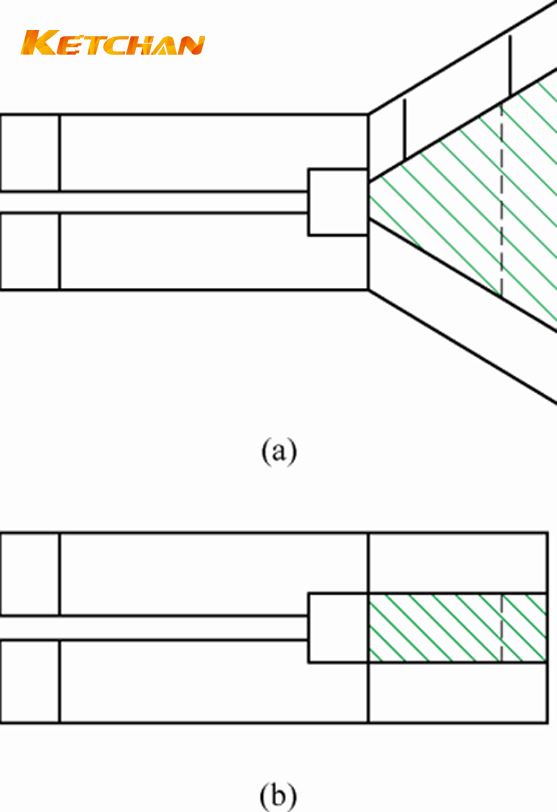 (a) A newly designed profiled structure (b) an existing common structure

(2) Optimization of process parameters Main influencing factors of induction quenching full-tooth width hardening process include coupling clearance, heating power, time and heating position, etc. The optimal combination of parameter factors was obtained by screening the influence factors and emphatically analyzing the influence factors such as preheating power, preheating time, heating power, and heating position. On the basis of the above new structure inductor (used for Mn14 wind power inner gear ring), the problem of overheating and melting of end face without hardening of end face tooth root was solved by optimizing the process parameters of induction quenching end face. Partial factor DOE experiment design was carried out for four influencing factors, namely, preheating power X1, preheating time X2, heating power X3, and heating position X4. The output variables were Y1, the minimum hardened layer depth of the end surface tooth root, and Y2, the grain size at the node-circle position of the tooth surface. The test parameters and results were shown in Table 1. 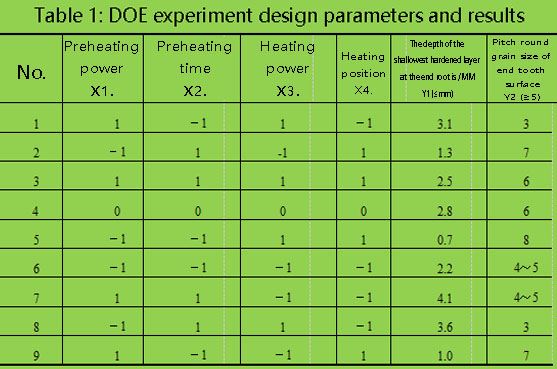 Through corresponding analysis of the test data, the relationship between the tooth root hardened layer depth Y1 and the pitch round grain size Y2 and the preheating power X1, preheating time X2, heating power X3, and heating position X4 was obtained by the fitting. The optimal parameter was predicted by the response optimizer, and the optimal process parameter was the center point, that is, the parameter numbered 4. The depth of the hardened layer of tooth root was obviously increased, the grain size of the tooth surface met the requirements, and there was no overheating and melting. Repeatability verification was conducted for the center point parameters optimized by the DOE experiment, and the repeatability was very good, as shown in Table 2. 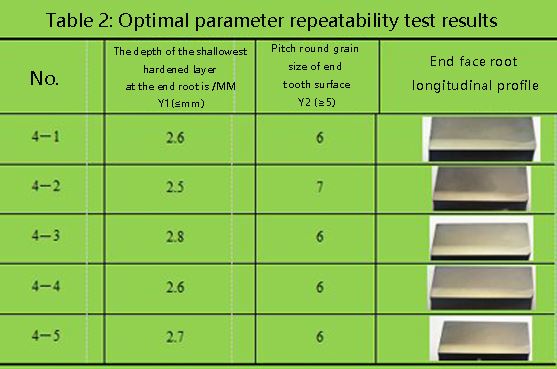 By designing a new structure inductor and optimizing induction quenching process parameters DOE test, the unsynchronous heating of tooth root and tooth surface was realized, and the overheat burning and melting of tooth surface without hardening of tooth root of gear end face was solved. The full tooth width hardening is realized, and the bearing capacity and quality of gears are improved. At present, this process has been used in the mass production of internal tooth rings of Mn14 to Mn20 with a range of 1.5 ~ 4MW wind power gearbox and has been widely promoted and bulk supplied to domestic and foreign customers.